Aficionados of El Greco – such as Bill Clinton(!) – will hopefully enjoy this Biography of El Greco.

El Greco is Castilian for “The Greek” for – although he spent most of his life in the Toledo area of Spain – he was Greek by birth, always signing his paitings in the Greek Byzantine way.

Our recent excellent guide in Toledo – who explained many of his works to us in detail – left our group extremely inspired by this artist’s paintings and their significance.

Apparently, El Greco sometimes used interns of hospitals/mental institutions as examples to help create the characters of his works, believing them to be closer to God.

Nowadays, many of his wonderful works can be seen in the Prado Museum Madrid, and throughout Toledo … 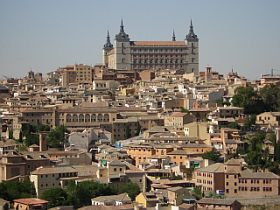 View from the outskirts over the charming, historic city of Toledo.
But … let’s get down to that Biography of El Greco …

Christian doctrines had a tremendous influece on both El Greco’s life and artwork.

Because he was guided by his religious principles to such an extent, El Greco referred to himself as an artist-philosopher.

His works show Byzantine and Mannerist influences – the images conceived in the mind, the light incandescent, colours pure, and figures elongated.

They portray overwhelming devotional intensity, making him the most vital visual representative of Spanish mysticism.

He often produced an open pipe between Earth and Heaven (eg the Annunciation), implying he could see the holy path from common human existence towards a very real Heaven.

Although he primarily painted religious works, he also did some portraits – of extremely high quality. Was also a sculptor and architect.

El Greco received commissions as soon as he arrived in Toledo. Some include:

From 1590 until his death, the painter’s output was prodigious and sometime vision-like – repeating several themes – and characterised by extreme distortion of the body. Later works include: