Skip to content
The Spanish alphabet is, basically, made up of the Latin alphabet with a few special/additional letters.
The vowels are sometimes marked with an acute accent. This indicates a stress – either when it doesn´t follow normal grammatical rules or in order to differentiate otherwise similarly spelt words.

So … how many letters are there in the Castilian Spanish alphabet?

This is not such an easy question to answer as you would, at first, think and reference books often disagree!

However, according to the Real Academia Española (RAE) or Spanish Royal Academy – which is the official body deciding these matters – there are 29 letters in the alphabet, made up as follows …

Traditionally, there was also a separate letter rr in the Spanish alphabet.

However, this is no longer the case and the Real Academia Española no longer considers it a letter.

The letters ch and ll have been considered separate letters since 1803.

But, in 1994, the Association of Spanish Language Academics agreed to sort ch and ll as ordinary pairs of letters – by request of UNESCO and other international organizations – while keeping them as distinct letters for other purposes.

In other words, if looking up the word chorizo in a dictionary, it will now be listed between ce and ci and NOT between c and d as it was formerly.

To sum up … ch and ll are considered separate letters, but are not treated that way for alphabetizing.

You may well find that some reference books and dictionaries do not include w or k listings, for these letters tend to be used almost exclusively in words of foreign origin.

Also, some books will count rr as a separate letter.

Click the little arrow on the audio clip below to hear the Alphabet Letters In Spanish being said.

Although there isn’t much difference, we concentrate on Castilian Spanish – in other words, the Spanish spoken in Spain – rather than South American Spanish.

You can pronounce w as doble u or doble v but, in the audio clip, we use doble u.

Following the audio clip, you’ll find the names/pronunciation of the Spanish alphabet in text format.

The pronunciation of certain Alphabet Letters In Spanish leads to common mis-spellings in the Spanish language.

For example, the Spanish do not differentiate much between b and v which means that a b is often written instead of v and vice versa.

With the letter h, because it is silent in the spoken word, it is sometimes – wrongly – omitted in the written word.

The letter c should be pronounced as th when it precedes an i or an e in Castilian Spanish.

However, because this is not always done, it leads to mis-spellings between c and z.

Now You Know Your Spanish Alphabet, Why Not Browse Our Other “Learn Spanish” Lessons? Just Click Here. 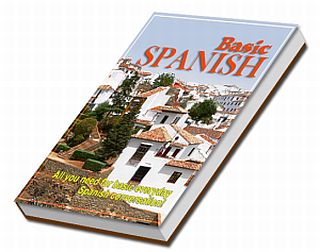 Now you’ve assimilated all the Alphabet Letters In Spanish , why not download this free, 46-page, easy-to-understand e-book covering the basics of Spanish?

You’ll need Adobe Reader (the latest version is recommended) installed on your computer in order to open and read it. You probably already have this but, if not, you can get Adobe Reader by clicking here (a new window will open so you can download without leaving this page). It’s free to install.

To download the Spanish e-book so that you can view it later on your computer, just right-click on the link below and choose “Save Target As” or “Save File As”. Then select where you wish to save the book/file on your hard drive.

Do you want to take your knowledge of the Spanish language further and learn more?

Before buying language learning software, dvd’s, cd’s or text books, take a look at the prices on eBay.

Very often, you’ll discover what you’re after at a fraction of the price elsewhere.